At Gameology we are all about giving customers the best bang for their buck and there is no better feeling than buying a game that you are able to keep coming back to and replaying for years.
There are so many games we can think of that have multiple play sessions with friends burned into our memories that we can't stop coming back to but for now, we had to limit it to 8 to get you started. A game of mystery and social deception, One Night Ultimate Werewolf pits werewolves against helpless villagers. Players assume the roles of these villagers or werewolves.

To win, Team Werewolf must remain undetected and ensure none of their fellow conspirators are caught. As for the villagers, they must ensure they accuse the correct person of lycanthropy. This may seem to be simple enough goal but the complexity lies in the incredible variety of roles players can choose for both werewolf and villager teams. Each role allows for a unique ability to confuse villagers, reveal identities or just simply cause chaos for both teams.

One Night is an incredibly quick party game, only taking a maximum of 20 minutes, but with the large variety of different roles and combinations, this is a game with immense replayability and that’s not even considering all the expansions that add even more roles, mechanics and teams. Smash Up Mixing Dinosaurs with Zombies or Star Trek Characters with fairies, what's your winning combo? In Smash Up players choose 2 decks from an ever-growing line up of popular fictional themes, and ‘shufflebuilds’ them together to create a winning combination.

Each faction is unique in specialty and abilities so choose carefully. Once chosen players will summon minions, play actions or apply upgrades and downgrades until they are finally able to destroy Base cards. The player with the most crushing power gains the most victory points. Smash Up’s diverse range of factions from popular fiction make every game and deck unique, so you never have to play the same way twice.

Check out Smash Up here Fluxx is a quick party game for 2 to 6 players, in Fluxx there are only 2 rules, pick up and play a card.

To win in Fluxx, players must skew the win conditions in their favor.

Each card played alters the win condition and if a player already has achieved the specified goal, they win. A Stonemeier gem, Scythe is asymmetrical tile domination game for 1-5 players (1-7 with expansions) with some of the greatest art to have ever graced a board game. Players must gather resources, build their armies and infrastructure, and strive to control the coveted Factory Tile in the centre of the map.

Though technically a domination game, domination is merely a means to an end, as to win in Scythe players must balance their popularity and economy, and try to accomplish 6 of the 10 objectives in the game A game of dexterity, Crokinole is a beautiful combination of precise skill and wild, erratic, sometimes even destructive flicking, In Crokinole, players will either duel or face-off teams of 2, flicking their small wooden tokens gracefully across the board towards the centre.

In pursuit of the centre hole, players will also be trying to knock opposing pieces out of play to deny points being awarded.

As a dexterity game, the game will alter depending on the pieces present and the strategies players must come up with in response. Smash, grab, shoot, and destroy in this Robot Wars board game adaptation.

Volt pits players against each other in this gladiator style, fighting board game. In Volt, players are given the option to add or remove complexity.

For players new to the game, there is an easy-start option whereby players will be able to play the game with only its core mechanics.

In this mode, players will race around a number of completely unique maps collecting victory points to score. To hinder other players, robots are able to shoot and ram into the opposition, and if enough damage is dealt the damaged robot is eliminated.

In its more complex form, for experienced players, Robots can acquire upgrades and in so doing, adds new and game-changing mechanics.

In this mode, players will have to factor in opponent's shields, new weapons, and upgrades. Do you have what it takes to destroy the competition?

7) Race for the Galaxy Playing mega, galactic civilizations, players must attempt to bring planets and their advancements into their monopoly.

In this card game of strategic hand management, players will attempt to gain resource-rich planets, technologies, and social developments to further build their empire and score points.

Planets themselves provide game-ending victory points, resources harvested from planets vary in rarity and thus value and provide players with bonus points. Finally, the technologies and social developments give players new abilities and bonuses from their turns.

These different aspects of the game by themselves create an interesting game but the real jewel of Race for the Galaxy is in its simultaneous phase and turn order.

In Race for the Galaxy players secretly choose which of the 7 game phases they would like activated for that turn, and in doing so opens that phase for all other players.

By finding the balance between what you need but simultaneously denying a phase for other players is the goal to synergising your strategy and thus achieving your victory.

Check out Race for the Galaxy here

I enjoyed so much last week reading everyone's reviews of their favorite 2 player games I thought it would be a good idea to bring it back and Shout out to Navin Gulavita for his review of Star Wars Rebellion in our best 2 players game selection it has me excited to give it a go myself.

Just like last week to get yourself featured in the Gameology library from now until the end of time just leave a comment down below or over on the Facebook post here: and give us a review of your favorite high replay value game. 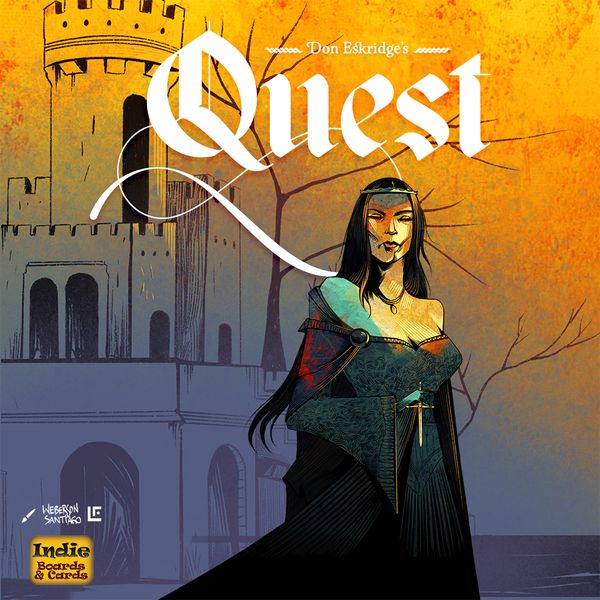 Quest is a quick, modern, and dark twist on the already highly re-playable "The Resistance: Avalon". Players can no longer vote to approve teams and making this a much quicker and more elegant game.For those who are not familiar, in The Resistance: Avalon, players are dealt secret roles and are placed in 2 teams, Merlin's Followers and the Minions of Mordred. Merlin and his followers must discern who among them is evil and Mordred's Minions must discern who holds the role of Merlin and sabotage quests. Each round, players vote on who must go on quests to help the realm. 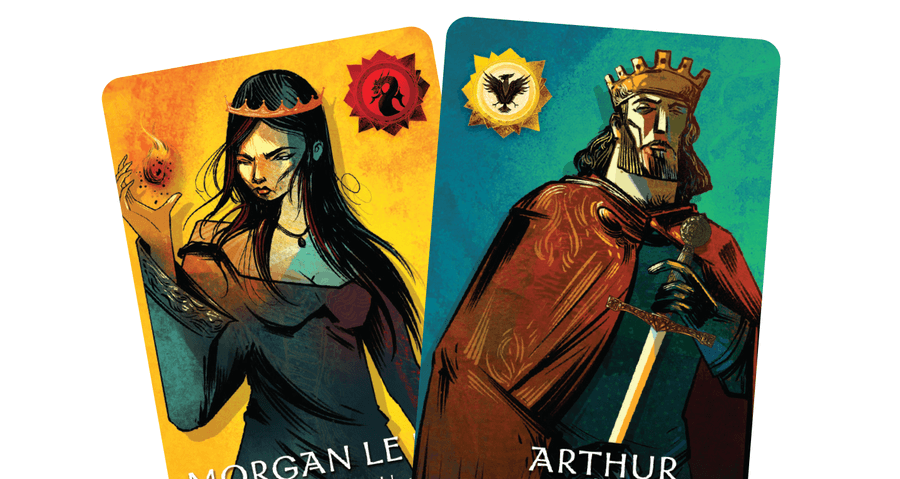 In The Resistance: Avalon in a group of experienced players, the voting is a great way to extrapolate information and do mini bluffs, but if any players aren't incredibly knowledgeable in the game it always had the ability to throw a kink into the game or else be non-essential. In 2020 we have all know how important it is to make everything essential! 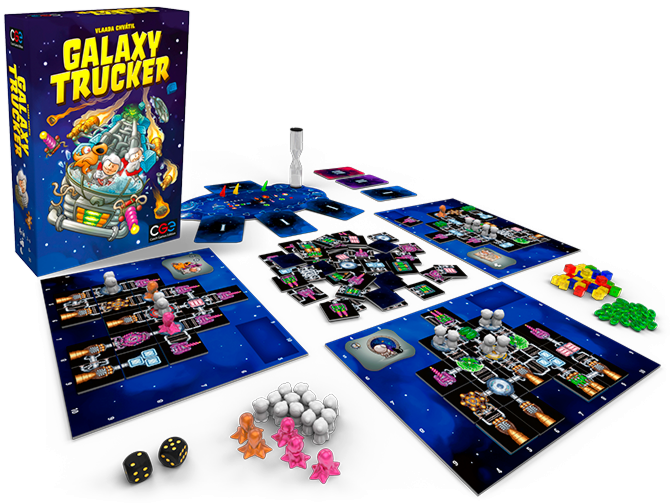 This may be a little sneaky putting this game in the 2021 Update seeing as the original came out in 2007 but look at that art and wonderful vibrant colours. Admittedly this edition doesn't change anything substantial in terms of rules and mechanics but with such a fun game why fix something that's not broken?

For the uninitiated, in Galaxy Trucker, players build their trucks in real time, scrounging together garbage provided to them by the loving corporations. Once built and assembled, players must race through a circuit encountering a multitude of events ranging from space pirates to new planets rife with precious resources. All the while trying to keep their Galaxy Truck together.

In this game players will laugh and cry as pieces of your ships are slowly torn away from meteorites and blast cannons and you all desperately try to keep your craft afloat. Each time you play you'll think of better ways to assemble your ship and hold on to your dear credits. 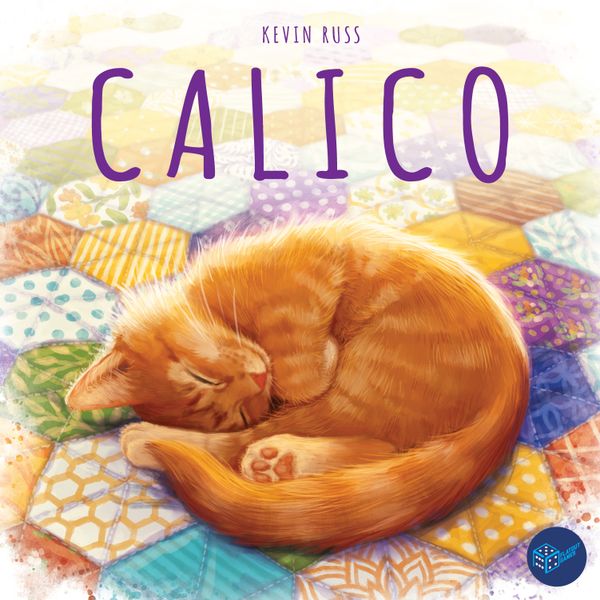 Unlike the other games on this list Calico is not one of the quickest games but that's not to say it isn't incredibly re-playable. In Calico players will be assembling bits and pieces into a luxurious quilt. The quilt will score based on aesthetic appeal. But more than that, depending on how you arrange your quilt pieces, you can attract CATS to your quilt. Each cat is picky about how they like their quilt arrange and how many pieces but depending on how much effort you choose to put into your quilt you will be happily rewarded with some high point kitties! 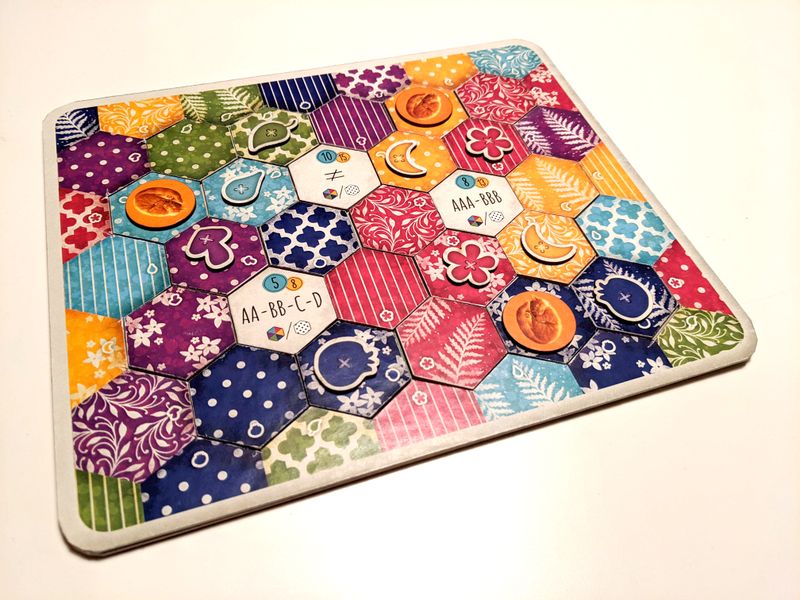 Calico keeps you playing with fun modular objective tiles that change the way you play depending on how you've chosen to arrange your starting tiles. Thus making it so no two games are the same!

Get your order as early as 07 July*