What is a LCG?

A Living Card Game (LCG) is a term coined and trademarked by Fantasy Flight to describe several games in their expanding library of card games. LCGs operate as normal Trading Card Games (TCG) but differ in the way expansions, packs and new releases are distributed.
Unlike TCG, new releases for LCGs are sold in set, predefined packs with no difference between packs of the same release. Without discrepancies between packs of the same collection, there is no rarity in cards and players will always know the contents of the packs they purchase.
To assist you in choosing a game and its expansions, here are brief descriptions of some popular LCGs and the expansions for them in order of release. 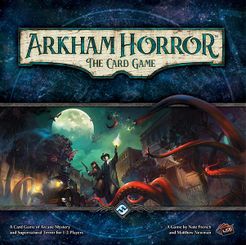 Arkham Horror is a cooperative adventure game based on H.P Lovecraft's Cthulhu Mythos. In Arkham Horror players take on the role of paranormal investigators, gathering clues and solving mysteries around the world starting with the haunted streets of Arkham. Players will collect items fight off horrifying abominations, and uncover the secrets of the many dark corners these Lovecraftian horrors call home. Through the course of the core game and the many other narratives, players will acquire new skills, allies, items, weapons, and spells. Arkham Horror’s many and compelling stories’ twists and endings will have players replaying their investigations to see the other possible outcomes based on different decisions made in the game. But be sure to investigate thoroughly with each play through to avoid being defeated or driven insane with each new horror. The many expansions listed below take players through different narratives and new investigations that continue to unfold with each new cycle update.

Legend of the Five Rings

Set in the realm of Rokugan, a fictional and fantastical land based on the culture and designs of feudal Japan, players must face against rival clans for honour and control. In Legend of the Five Rings, players must duel with both militaristic and diplomatic means simultaneously. Despite the war, treachery and deception, clans are still bound to certain rules of warfare and must remain within those boundaries as swords and spies are not nearly as important as honour in the land of Rokugan.

Legend of the Five Rings is a dueling LCG, whereby players must construct two different decks: a Dynasty Deck for the players’ provinces, strongholds, and characters and a Conflict Deck which contains, a players’ recruits, tactics, and upgrades. The game is played in steps and rounds to ultimately destroy their opponents Stronghold Province, reach an honour threshold, or deplete the opponent’s honour. In addition to the core set Legend of the Five Rings, has many expansions in the form of cycles. Each cycle contains different themes and the packs released in the same cycle are made to play together though this is not completely necessary. Included in each cycle is a narrative that continues with each pack to further involve you in its in-depth story.

In Android Netrunner, players face off, each either taking the role of a Mega Corporation protecting their secrets or a tech savvy hacker trying to breach through the Corporation’s many security systems. In this asymmetrical LCG, players will have completely different styles of play, the very layout of the game will be vastly different for both sides, so an all in one strategy is impossible, therefore making the deckbuilding aspect of this game even more crucial but also potentially more creative.

To win in Android Netrunner, a Corporation must research and gain agendas which are worth a specific number of victory points, in turn, Hackers must break into a corporations many servers and uncover these agendas, effectively stealing the agenda’s victory points. To combat this thievery, Corporations must fund and implement data fortifications of varying degrees and complexity in the form of ICE. ICE is used to stop Hackers from entering into servers and may seek to deal damage to attacking hackers. Hackers must stay ahead of the corporation’s fortifications by upgrading their hardware and thus gaining new abilities.

By not only gaining abilities but by creating a scheme and plan of attack players will gain entry into various servers and wreak havoc for the poor Mega Corporation. If you’ve ever wanted to be in control of a soulless Monopoly, or a cyborg hacker who whispers “I’m in” to themself, this is the game for you.

The Lord of the Rings

A cooperative adventure card game, the Lord of the Rings LCG, places players in the shoes of adventurers striving to stem the reach of Sauron and his armies of Mordor. In the core set of the Lord of the Rings Card Game, 1-2 players (or up to 4 players with an additional core set) will choose one of 4 starter decks for their collection of heroes. Players will then work together to tackle scenarios and will complete them if they are able to overcome all the stages in the quest deck. During a scenario, the encounter deck, filled with challenges and dangerous fiends, will attempt to damage players’ heroes and raise a player’s threat level. This threat level determines the level of risk a specific player has taken on and if a player’s threat level exceeds 50, they are eliminated from the game.

Check it out here: Lord of The Rings The Card Game