It’s a week before Christmas. Shops are as packed as social distancing will allow. You need to pick up a couple more gifts for your friends and in-laws but you’re flat-out of ideas—and budget.

Here are Gameology top picks for stocking stuffer games, all under $15! This fast-paced matching game is the perfect stocking stuffer game because not only is it priced at a cool $14.95, it’s frenzied fun for all ages!

In Spot It, you get fifty-five circular cards, each littered with a variety of symbols like trees, hearts, keys and candles. Each card has exactly one symbol in common with every other card in the deck.

Here, I would explain how to play, but the coolest thing about Spot It is that it’s technically FIVE (yes, five!) mini games, all in one easy-to-transport tin! All the games will test your reflexes and observational skills and since the mini games are so quick to play, there’s never any downtime. Translating to ‘Take 6’, the German card game 6 Nimmt is a steal at only $14.95. Playing anywhere from 2-10 players, this is a great stocking stuffer for someone with a big family or friend group.

In the vein of many other card games, in 6 Nimmt, you are desperately trying to not be the one to pick up the growing rows of cards in the middle of the table. Each turn, everyone will secretly choose a numbered card from their hand and reveal it simultaneously. Then the cards must be added to rows in the middle of the table in ascending numerical order. However, if you are the sorry sop who ends up placing the sixth card in a row, you have to take the entire row and add it to your score. At the end of the game, the player with the lowest score wins.

At higher player counts, the game is full of hilarious chaos, whereas at lower counts, it’s more strategic. A numbers game that’s cheap and fun for the whole family—what more could you ask for? How could we forget the classic small card game, Uno? Clocking in at just $11.45, Uno isn’t just classic, it’s cheap!

In case you've never played Uno on a rainy day timetable during primary school, let me catch you up on how to play. The aim of the game is to get rid of all your cards. Each turn, you must play a card that matches either the colour or the number of the card in the middle. Some cards have special abilities like being able to choose the new colour or reverse the turn order or even make the player after you draw more cards! When you only have one card left in your hand, be sure to shout ‘UNO!’ before the other players catch you, otherwise you’ll have to draw cards!

This particular version comes with 4 extra cards—one that lets you swap hands with another player, and three dry-erase cards that let you make up your own rules! Saboteur: Duel is a standalone version of the famous card game Saboteur for one and two players.

When playing alone, you want to collect as much gold as possible by digging new tunnels in the mine; when playing with an opponent, you'll just want to collect more than that player, but naturally your opponent will try to block your progression by all means.

In this card game, you play path or action cards.

The path cards form a maze in the direction of the six goal cards, which contain a variable number of gold stones.

The action cards are used to hinder your opponent or to help you to repair broken equipment. A greedy troll also lurks in the mine, and you will have to pay him to progress and he doesn't give back any change! Perhaps none of the games on this list were quite right. Perhaps you’re not sure if your recipient will like any of the previous games because they’re your distant third cousin you only see once a year and all you know is that they like trains.

Here’s where the cheapest stocking stuffer game on this list comes in—Top Trumps. These little plastic packs of cards range in price from $5 to $15 and cover so many topics, I can’t list them all here. These are the absolute perfect stocking stuffer for those people you don’t know much about. Think of one thing they like and I’m sure there’s a Top Trumps game for it.

Since Top Trumps are so cheap, for $15, you could get two or three different ones to really pad out that present!

Something for that family member you barely know? Top Trumps.

And there we have it! Our top 5 stocking stuffer games under $15! What do you think? Did we miss anything? Let us know in the comments below! 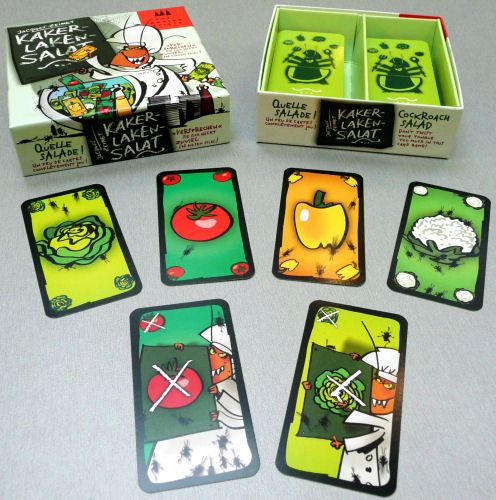 A new installment to the Cockroach series, Cockroach Salad continues the genre of deception with this salad crafting and lettuce-lying game. In Cockroach Salad players create a common salad packed with lettuce, peppers, tomatoes and cauliflower – but they won't always be saying which ingredient they're adding to the bowl!

One by one players must draw from the newly created salad deck and exclaim (truth is optional) what ingredient they drew. If it is a previous played or claimed ingredient or a taboo card, they must lie. A lie that is called out results in the liar picking up all the drawn cards. The winner is the first to run out of cards. A fun, little and simple party game where you must answer loaded questions and then try and guess who's answer belongs to which player. First player to guess correctly a certain amount of times wins. It's not an incredibly deep game but it is definitely one of the fun ones.  Writing extravagant answers to derail suspicion is an incredible joy.